Nature Notes along the Bike Trail...

Walking along the bike trail in Loveland, Ohio. This is what I saw: 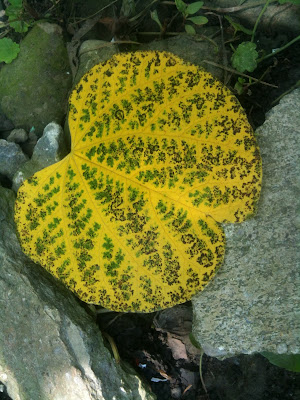 It is June, of course, and I am in the Northern Hemisphere. But, I saw a few of these yellow leaves here and there. I tried to ID them, but can't. They have strange squiggly markings on them in black and green. 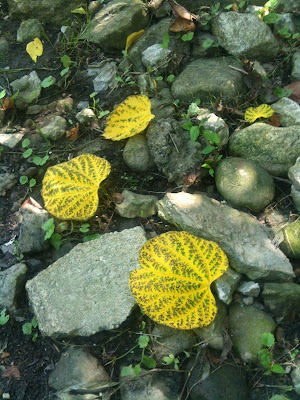 The next unusual thing that I saw, I WAS able to identify. It is an exotic looking tree with an exotic sounding name - the Mimosa! 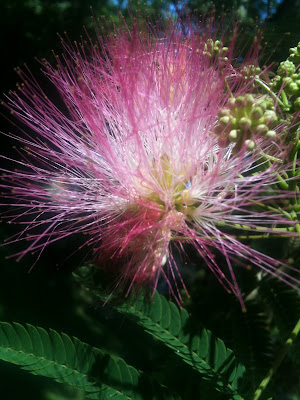 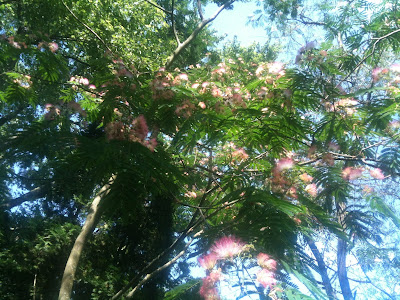 I prepared this post in order to participate in Nature Notes over at RamblingWoods.com. We all get together on, or about, Wednesday to see what nature is up to here and there around the globe! 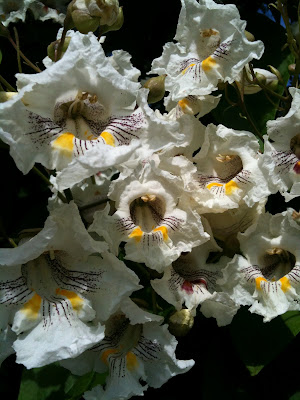 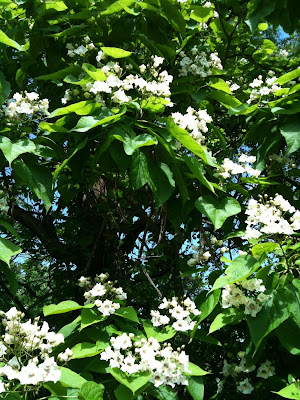 I took the photos of the catalpa flowers a month or two ago, and the "bean" photos yesterday! 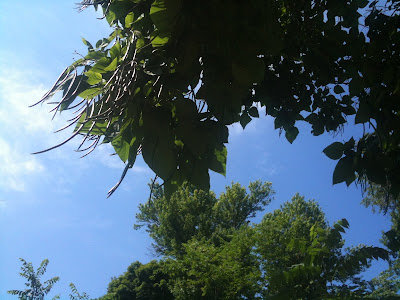 I am sharing this post with Floral Friday Fotos and also with Haiku my Heart!!

I thought that orange lilies from my yard would compliment the three different types of orange and black butterflies that I have photographed lately! These were all photographed in Ohio. 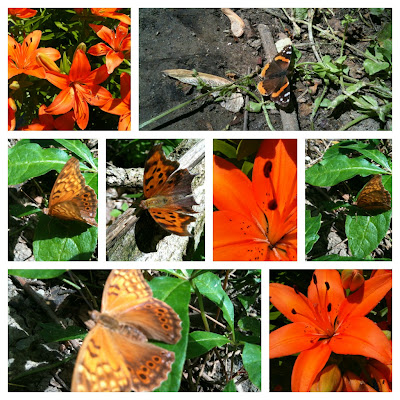 The butterfly at the top right is the Red Admiral.

The second butterfly in the second row is the Eastern Comma.

The big one at the bottom is the Tawny Emperor.


I had so much fun identifying these with a site that I found. You check off boxes that match the characteristics of the butterfly and - Presto! - they tell you what it is!


I have prepared this post so as to participate in Nature Notes over at RamblingWoods.com. Click on the link and check it out! Its a great meme, and the RamblingWoods.com site itself is a great place to ramble around! 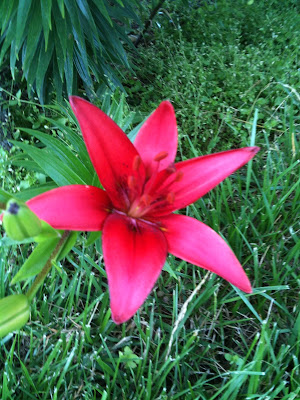 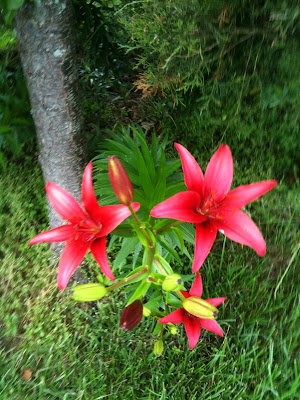 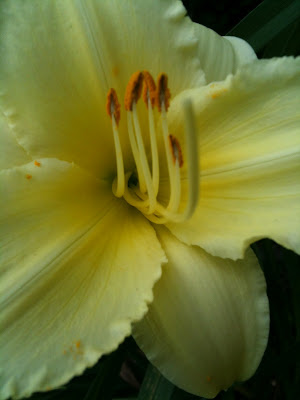 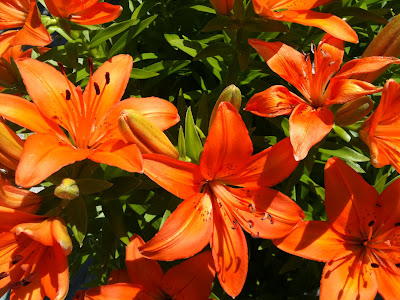 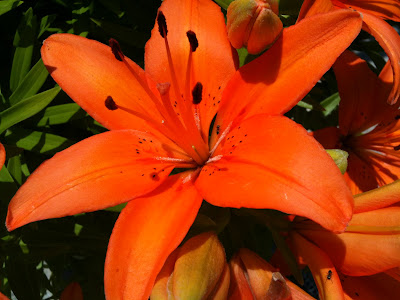 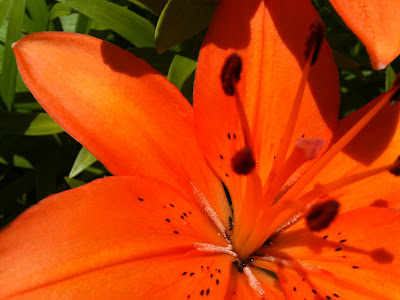 I am linking this post with Floral Friday Fotos and Haiku My Heart! Click on the links to join the fun :)
Posted by Libby at 10:50 AM 47 comments:

My Town Shoot Out - Tourist Spot!

For fun, I will show you some photos of one of the town's principal tourist attractions, and you see whether you can guess where we are! 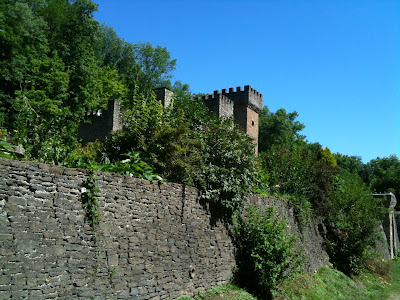 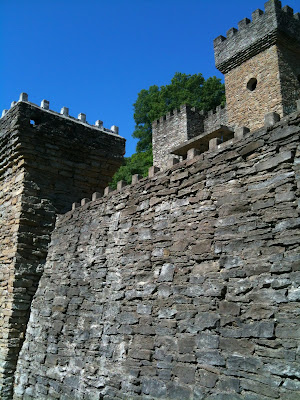 Have you guessed where we are yet? 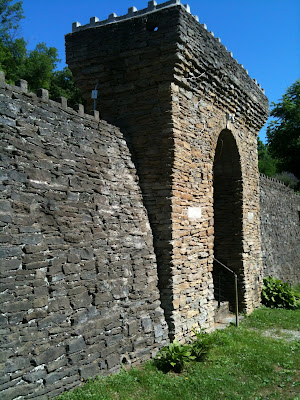 To help you out, here is some information from the castle's website:

Chateau Laroche was built as an expression and reminder of the simple strength and rugged grandeur of the mighty men who lived when Knighthood was in flower.
It was their knightly zeal for honor, valor and manly purity that lifted mankind out of the moral midnight of the dark ages and started it towards the gray dawn of human hope.
Present human decadence proves a need for similar action.
Already the ancient organization of Knights have been re-activated to save society.
Any man of high ideas who wishes to help save civilization is invited to become a member of the Knights of the Golden Trail, whose only vows are the Ten Commandments. 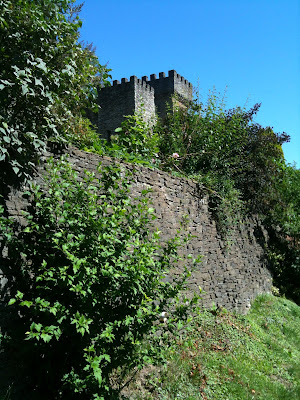 Did you guess that the castle was in Loveland, Ohio on the banks of the Little Miami River? Of course you did! Because nothing says 'Ohio' like a castle!

Here is what Wiki says regarding the castle's origins: Château Laroche, also known as the Loveland Castle, is a museum on the banks of the Little Miami River in Loveland, Ohio, United States. A folly of a historical European castle, construction began in 1929 by Boy Scout troop leader Harry Andrews. He built the castle on two free plots of land that his scouts obtained by paying for one-year subscriptions to The Cincinnati Enquirer.[1] When Andrews died in 1981 he willed the castle to his Boy Scout troop the Knights of the Golden Trail (KOGT).[2][3] The Castle has been extensively upgraded and renovated in the years since Andrews death and has been mostly completed by the KOGT. The East tower now houses a short video presentation on Andrews' quest to finish his dream. The walls of the upstairs chapel feature many stones brought back by Andrews in his world travels and others sent to him from foreign locations by his friends and followers. Recently completed are an expansion to the outside gardens and a greenhouse.
Tales of the castle being haunted – often coming from Chateau Laroche's own volunteer knights – have been reported over the years.

I have prepared this post to participate in Friday My Town Shoot Out...a weekly photography meme! This week's theme was local tourist attractions! Clink the link to learn more!

Last week I showed you the giant falling limb in Dad's yard. Lest you think it is all disaster over there, this week I bring you a mosaic - my first(!) - I made of things I found around the yard and a bouquet I made.

The robin's egg had a hole on the other side and some yolk. I think that a chick had just never developed and the mother got rid of the egg. My dad found it while mowing. 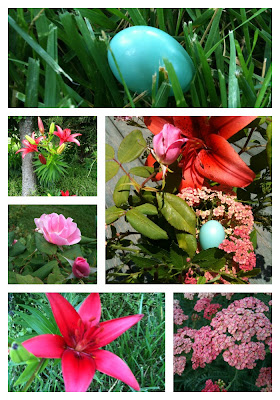 This post was prepared for Nature Notes hosted by RamblingWoods.com. Click on the link to see this wonderful meme and website!
Posted by Libby at 12:36 PM 19 comments:

Mystical Yarrow.
I Ching. What will you foretell?
The fate in your stars. 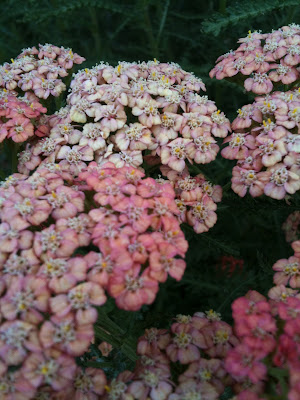 Here is a link to information about using yarrow sticks/stems to do I Ching. I will collect sticks in the fall. 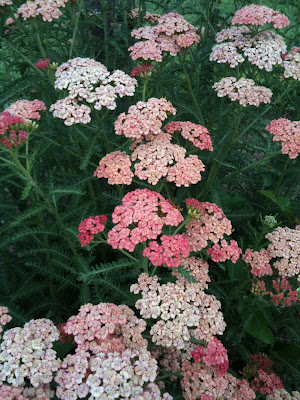 I am linking this post with Floral Friday Fotos and Haiku My Heart~ Check out these cool memes - lots of great people and interesting posts!

I am participating in Nature Notes over at Ramblingwoods.com.

This week's subject for Nature Notes presented itself rather rudely and unexpectedly. We had a couple of windy - but, not THAT windy - days. And, a huge limb on my dad's Bradford Pear tree just broke away. 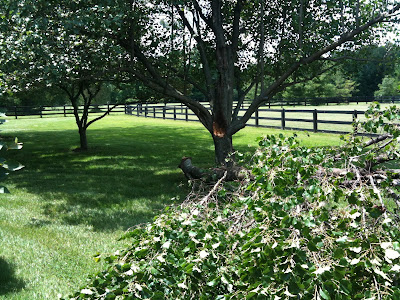 It does not look that huge from this angle. But, it was very bushy at the top and it came all the way to the fence and engulfed it! The aforementioned bushiness is part of the reason that we think it broke. The leaves and limbs are so dense that the wind cannot pass through very well and so the limbs catch the wind, so to speak, and get blown down. The Bradford Pear has beautiful blossoms in the spring, but is known for dropping limbs. 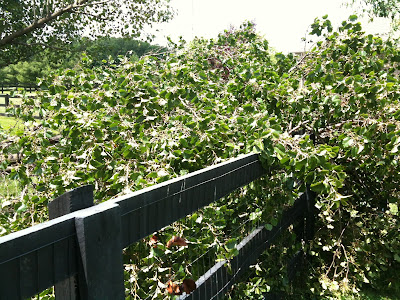 Well, there was nothing to do, but clean it up. This is my dad! He is in his 70's, but really active, with a full-time job and giant yard! 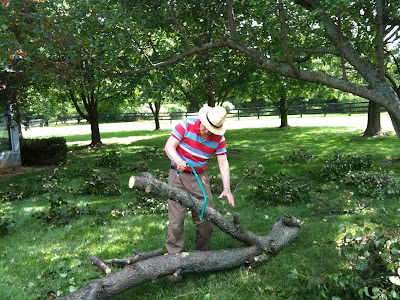 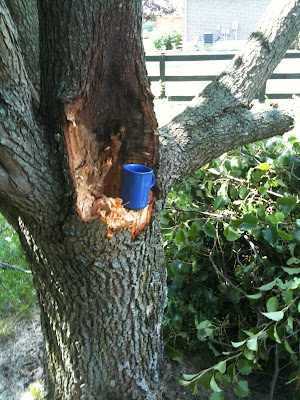 We found evidence of woodpeckers on the fallen limb!! Look at the holes all in a row! 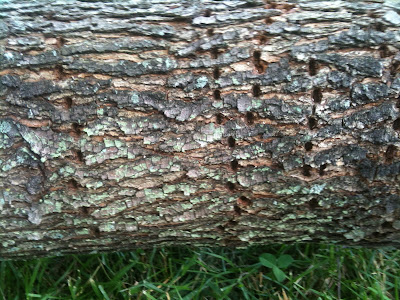